Researchers from the University of Copenhagen have succeeded in targeting and killing a single bacterial species (E. coli) without causing harm to the surrounding community of commensal bacteria in a simulated small intestinal microbiome using a cocktail of viruses (bacteriophages). The study proved that this approach is as effective in killing the targeted E. coli as broad-spectrum antibiotics but has much gentler impact on the normal, and often beneficial, microflora compared to antibiotics. 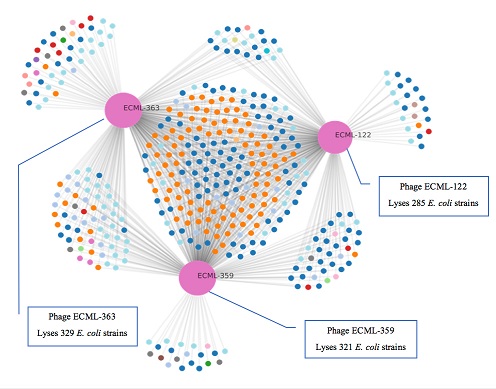 Three bacteriophages (pink dots) were tested against a huge collection of Escherichia coli strains representing different serotypes. In combination the three bacteriophages kill most of the tested strains. The graph was generated using proprietary PhageSelector™ program developed by Intralytix, Inc.

The experiment underlines the potential of using bacteriophages for target-specific manipulation of complex microbial communities and potentially replacing or supplementing usage of antibiotics as therapeutic agent against bacterial diseases.

Imagine that you have become ill because you have eaten some food that contained pathogenic bacteria. You keep running to the toilet and you may also throw up. You go to the doctor and are prescribed broad-spectrum antibiotics, which – in addition to killing the bad bacteria in your intestinal flora – carpet bomb the complex community of commensal bacteria forming a healthy intestinal flora.

New research from the Department of Food Science (FOOD) at the University of Copenhagen suggests that, in the not-too-distant future, it might be possible to drink a cocktail of selective viruses (bacteriophages) that travel directly into the gut and kill the disease-causing bacteria, so you get better – without the use of antibiotics and without harming the beneficial commensal intestinal bacteria.

The researchers have come a step closer to this scenario.

“The research shows that we have an opportunity to kill specific bacteria without collateral damage to the other, and otherwise healthy, intestinal flora”, says Professor Dennis Sandris Nielsen from Department of Food Science at the University of Copenhagen.

He emphasizes that the result was created in a model of the small intestine; so the next step will be to test the study on mice and later on humans if such treatment is to be implemented.

Model of the small intestine

The model in which the research has been conducted, TSI, was developed at FOOD by postdoc Tomasz Cieplak, in connection with his PhD project, with Professor Dennis Sandris Nielsen as his supervisor. 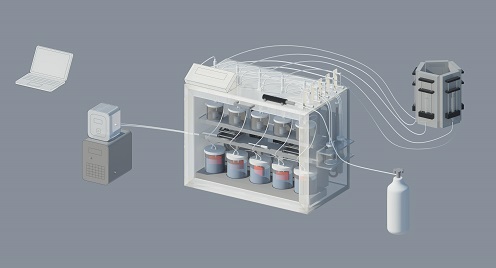 3D representation of the TSI in vitro model. TSI consists of 5 elements: main unit, water bath, syringe pump station, nitrogen tank and computer which controls the whole setup. In the main unit, there are multiple reactors capable to test up to 5 samples at the same time. Illustration: Maja Czesnik

New research in an old method 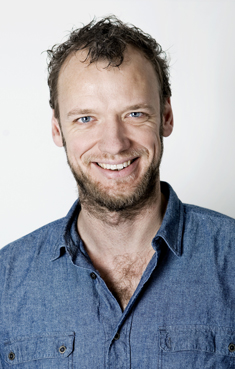 Professor at the Department of Food Science at the University of Copenhagen Dennis Sandris Nielsen.

“Using bacteriophages to kill pathogenic bacteria is not new and has actually been used to treat food-borne illnesses and other diseases in Eastern Europe for almost a century, but it was not until relatively recently that this approach started to attract more widespread research interest”, says Dennis Sandris Nielsen

The research into combating infectious diseases with viruses was not as interesting because you already had an effective treatment with antibiotics.

“It is different today, where resistance to antibiotics is an increasing problem in modern medicine. At the same time, we have become more aware of how important the commensal bacteria in the gut are for our health”, says Nielsen.

Phages (bacteriophages) are viruses that attack bacteria – in this context, bacteria in our intestinal microbiome. The classic lytic phage attacks bacteria by attaching to the surface of the bacterium and injecting its genetic material into the bacterium. It takes over the bacterium’s metabolism and redirects it to create new viruses. The bacterial cell, now taken over by the phage, will explode and send a lot of new phages into the surrounding area, which can then attack new bacteria.

Postdoc at FOOD Tomasz Cieplak about the research and the TSI:

The authors are: Tomasz Cieplak, postdoc at the Department of Food Science at the University of Copenhagen (FOOD), Nitzan Soffer, Intralytix, Alexander Sulakvelidze, Intralytix, and Dennis Sandris Nielsen, professor at FOOD.

The research was carried out in collaboration between FOOD and Intralytix Inc., Baltimore, USA, which was the first company to receive the Federal Drug Administration’s (FDA’s) approval to use bacteriophages in food safety applications. The company produces several products based on bacteriophages to fight food-borne pathogens. Recently, Intralytix was granted clearance by the FDA to initiate Phase I/II clinical trials for testing the efficiency of bacteriophages in the treatment of inflammatory bowel disease. The Company holds several bacteriophage-related patents (including two US patents on using phages for modulating animal - including human – microbiomes) and is actively expanding its product portfolio of phage-based preparations for modulating human microbiota for various health benefits.