Emil Buhl Krøll recently won 110,000 DKK as the overall winner of Venture Cup 2018 Idea Competition, which is an annual startup competition for university students. And he got the idea he won with while he was studying for a Master’s in Food Innovation and Health at the Department of Food Science at the University of Copenhagen. Now it will be tested in a new company that he founded with three partners – and a new chapter as a food entrepreneur can begin. He is already a co-founder of cider producer Decideret. 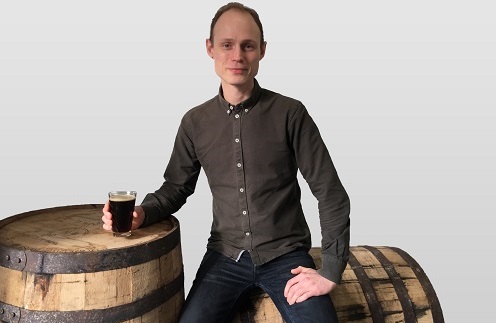 This article is part of a series of interviews with alumni from the Department of Food Science (FOOD) at the University of Copenhagen.

You received your Master of Science (MSc) in Food Innovation and Health at FOOD. What was your thesis about?

It was about brewers’ spent grain, which is a residual product from beer brewing. I first heard about spent grain at an entrepreneurship course where we did a case study on the potential of the resource. The course made me want to find out more so I went to Assistant Professor Michael Bom Frøst at the Department of Food Science and said that I had this idea of doing a thesis on spent grain but I did not really know where to start. He said that spent grain was an odd specimen that had not yet found its happy home. I began to investigate how to use the spent grain from different types of beer in food and conducted experiments in the department’s laboratories with Michael as my supervisor.

The fascinating thing was that no one had figured out how to use the spent grain in a food context, even though people had racked their brains over it for a long time – for we have had spent grain as long as we have brewed beer. The spent grain has traditionally been used for animal feed and it still is. But the spent grain is a rather unstable feed product – as farms are generally growing in size, they may not be as willing to tolerate this. That means there are many breweries that cannot get rid of their spent grain. For us as a society, it is of course important that we can use and reuse as many resources as possible, in terms of both food and energy, which also had an impact on my desire to go ahead with it.

I made some products and invited some lead users from the food industry to evaluate them. Among these were chefs and bakers that I had invited to some innovation workshops. The products I developed were bread, ice cream and a snack, all of which were very well received by these lead users; not least by a head of innovation for one of the largest Danish bakeries. It whetted my appetite to really make an effort to see if there was more to this.

You were also affiliated with the SCIENCE Innovation Hub?

Right before my thesis, I joined the SCIENCE Innovation Hub, because my project was about innovation and reached out into the food industry. I was delighted to be part of the hub, as your ideas are challenged and you meet many other entrepreneurs who see things from many different angles. For example, I shared an office with a programmer who asked completely different questions than a food scientist would. It was also through the hub that I became aware of the Venture Cup. Some representatives of the competition were coming and I was invited to attend. I had a conversation with a representative who thought what I proposed was exciting and recommended that I take part in the competition for the best start-up idea.

It ended up that I won, which is just crazy, cool and still very overwhelming. The prize money of 110,000 DKK is important to move forward with my idea in a new company I founded with three partners. But it is also about the emergence of new opportunities. Venture Cup has an amazing network and I have connected with a lot of people I would not otherwise have met.

What will happen now?

One thing is that I have made some small batches of flour from spent grain that had been tested in the food industry and can be used to bake bread. But now – through the new company – we have to take the next step and see what a realistic collaboration with a brewery could look like. The prize money from Venture Cup will be used to develop some products to be made in cooperation with buyers. My partners in the new company come with 10 years’ experience in sales, marketing and innovation and have a deep understanding of how to run a business of this type. This provides some tools to move the project forward, plus it gives much more confidence. In addition, they have a good network, so working with them has been a very important factor in my seeing a future for the project.

You are also co-founder of the cider producer Decideret – how did that come about?

Decideret was started because I and four others wondered why Danish cider did not really exist. We have Somersby and a few exclusive brands, but we did not have a real cider culture like in England, Australia, France and many other places. Again, we were motivated by the fact that so much fruit goes to waste. Many apples are turned into apple juice, but there is also a limit to how much apple juice people can drink. So we started making cider. I wrote a project about making cider where I studied a wild yeast and we also use wild fermentation in our cider in Decideret. So it is cool that you can use academic knowledge in practice and make a product that someone wants to buy. And it has worked. I am the only co-founder of Decideret who has a science background, so I got the title Head of Development. This year is a bit of a test year for us, as we have made our largest cider production ever: 6000 bottles and 100 kegs. If the reception is good, we will dare to scale up with Decideret.

Why were you initially interested in doing a Master of Science in Food Innovation and Health?

First, I studied Environmental Engineering at DTU, but switched to Biomedical Engineering. But I felt like I had not quite found my niche. While I was an undergraduate, I also worked as a cook for three years and I found that being a cook was more than just for fun. So after my Bachelor, I apprenticed as a chef at Geist at Kongens Nytorv, but the academic still pulled at me. I had heard about the Master’s programme Food Innovation and Health and thought that it was the perfect blend of science and gastronomy. And I had not been in the programme for long before I knew I had found my niche.

How do you use your education in your daily work?

I use, for example, my knowledge about the chemical composition of foods to understand how the spent grain can be used in food. It is also my education that forms the basis of my understanding of the spent grain as a resource that can be used in other contexts. And then there is the gastronomic part that is concerned with the taste of the food, which is also very important. That is how I use my education every day and I think that all aspects of the education are very exciting. There is also great enthusiasm among the teachers, who are incredibly helpful and dedicated, and in general there is a very good atmosphere in the programme.

2018– Co-founder of a new company, Circular Food Technology, which develops food based on brewers’ spent grain – a waste product from beer production

Brewers’ spent grain is the residual product from beer brewing when all the starches have been drawn off with the wort into the beer. Emil Buhl Krøll has developed a method to use brewers’ spent grain to make flour that can be used in food.