The University of Copenhagen is investing in a “state of the art” pilot brewery from the supplier Kaspar Schulz as an expansion of the Food Technology Park at the Department of Food Science (FOOD). The brewery, which can be equipped with advanced measurement and data collection technology, will strengthen the Department’s education, research and innovation as well as collaboration with the food industry. 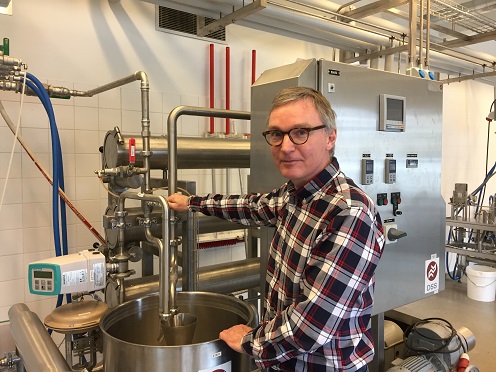 A new pilot brewery strengthens the University of Copenhagen’s technological facilities in the field of food processing. The Department of Food Science (FOOD) already has a pilot dairy, which is seen here in the photo with Professor Mogens Larsen Andersen.
Photo: Lene Hundborg Koss

Denmark has a strong brewing tradition and a leading position in the development of science and technology in beer brewing. The modern beer yeast research was founded at the Carlsberg Breweries in Valby, so the way we make beer today originates in Copenhagen.

“Over the last few years there has been a microbrewery revolution, which has brought a lot of innovation with it, so today there is a very active scene in which we as a university are playing a bigger and bigger role. Both because we are part of the training for master brewers and because the development increase the demand for research,” says Professor Mogens Larsen Andersen from the Department of Food Science (FOOD).

The brewery ordered by the university is similar to a brewery that the Carlsberg Research Laboratory had installed in 2017. The brewery will be installed on the Frederiksberg Campus in early 2019. 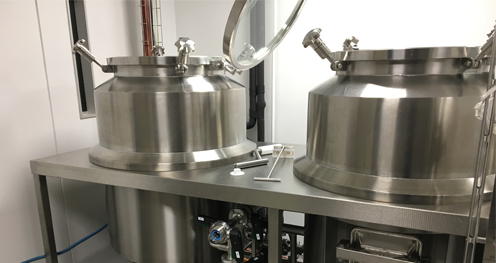 FOOD has ordered a brewery similar to the one the Carlsberg Research Laboratory had installed in the fall of 2017 (image). Seen here are two of the brewery’s four boilers.
Photo: Anna Haldrup

The Department of Food Science collaborates with the Scandinavian School of Brewing to offer an MSc in Brewing Science & Technology, which leads to the title of master brewer.

“It is a microbrewery with the same processes as a large-scale brewery and it will be used to teach and train the future brewers in the processes that they will also encounter at a brewery in the industry,” says Mogens Larsen Andersen.

The brewery, which can brew 50-100 litres of beer at a time, has four vessels: a mash tun, lauter tun, wort chiller and a whirlpool kettle. It will be possible to install sensors on the equipment and take samples of the beer, which can be used for detailed mapping of the brewing processes for research purposes. This could, for example, involve improving the processes, developing completely new processes or using new raw materials in combination with new methods for brewing beer.

FOOD also includes the Food Analytics and Biotechnology section, a world leader in the collection and processing of food data, including Process Analytical Technology (PAT).

To supervise and maintain both the brewery and dairy pilots, the Department of Food Science has hired a pilot plant manager who will take the initiative to create a network with other pilot plant managers in companies that FOOD collaborates with. Read more about this and watch video with Sylvain Barjon in the Dairy pilot plant...