Many manufacturing companies still base their production on a few seasoned employees who have a high level of knowledge about how the process should be in order to ensure that the final product is in order. This results in bottlenecks and a great dependency on individuals, but it need not be, as pointed out by Professor of Complex Data Analysis at the Department of food Science at the University of Copenhagen Rasmus Bro. He believes that many companies could have much smarter production using e.g. Process Analytical Technology (PAT). 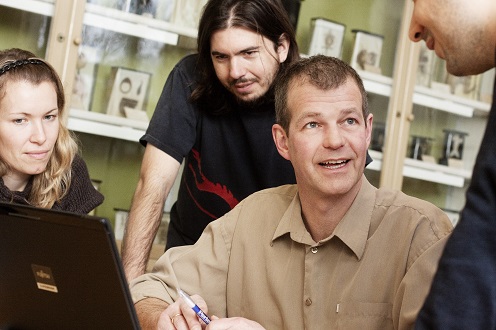 Professor Rasmus Bro from the Department of Food Science at the University of Copenhagen (middle).

In many manufacturing companies, a number of process parameters are measured without getting any particularly useful knowledge from that data that is collected. They typically measure many things, but fail to get an overall picture of what all of measurements can say together.

“Much of industry is controlled by a great deal of intuition among the employees. But what if the driving processor disappears? This is a problem in many places and if you can approach the measurements and interpretation of the data more scientifically, you can optimise your production much more efficiently and get a more robust production that is not dependent on individuals,” says Professor at the Department of Food Science at the University of Copenhagen Rasmus Bro.

He works with chemometrics, which is used to interpret the data that the PAT measurements provide.

“My field deals with how to turn the measurements into useful information that the food and pharmaceutical industries can use for quality control and optimising production. This could, for example, be information like the percentage of alcohol in the wine or the amount of protein in the grain,” says Rasmus Bro, who has followed the Danish food and pharmaceutical industries for more than 20 years with regards to complex data analysis.

Data interpretation – in addition to contributing to a higher quality of end product – can also ensure that the products are produced with the lowest possible cost in relation to the product specifications.

The ODIN consortium is training the industry

“I work at a department of food science that traditionally collaborates with industry. And it has been clear from the beginning that the interpretation of the data collected from expensive instruments used in production is a limiting factor. Even though there has not been much talk about Big Data in the food sector, it is really what we are talking about. As I said, the challenge is to translate the data into relevant information that enables companies to run their processes more sensibly,” says Rasmus Bro.

In order to change things, he founded the ODIN consortium.

“ODIN is an industry consortium where we upgrade industry skills in complex data analysis, so that they do not have to hire expensive consultants to exploit their data. We hold courses, seminars and workshops in chemometry and spectroscopy, which for the Department of Food Science has meant that we have been able to put our research directly into play in the industry,” says Rasmus Bro.

And even though Danish companies have a long way to go in utilising the collected data, they are far ahead of the rest of the world.

“After all, we have the company FOSS, which is probably the largest commercial chemometric competence centre in the world. At the same time, the section for Food Analytics and Biotechnology at the Department of Food Science is considered the world’s largest research unit in the field. But even with this base, there is still a long way to go in a world that is filled with data,” Rasmus Bro.

He predicts that within several years we will have many more small handheld instruments that can be used for process measurements.

“One can imagine that the instruments could be sent with drones, so we can get chemical-physical information with a much higher degree of detail than before. This could be directly from the tanker, from the fishing net or in the field. In the extreme, you might identify the chemical measurements in the raw material – for example, in the herring – which will provide some completely different opportunities than if you test the herring stored in glass jars in the supermarket,” says Rasmus Bro, who foresees almost 100% quality control in the future.

“It is in the cards that we will be able to measure the most incredible things, which may be of great benefit, but may also seem a little scary. You may be able to see whether the milk has been frozen and thawed. If the fruit from Brazil has been undesirably affected by the journey. We will be able to select apples and other fruits and vegetables of the highest quality and sell them at extra high prices, while others will be part of productions that have a lower bar for quality,” says Rasmus Bro.

It places high demands on the industry, where a competition parameter is whether you can produce a high quality product for the cheapest price in the fastest and smartest way.

Process Analytical Technology (PAT) essentially deals with measuring the relevant parameters at the relevant time and interpreting the data you get from the measurements correctly in order to control and optimize the production process optimally in relation to, for example, product quality, sustainability, food safety and ingredient quality.

PAT measurements are often fast and non-invasive. They are often done online, which allows you to adjust production while it is in progress so that you get the best quality for each and every batch of food the company produces.

PAT includes several different measurement methods, including near-infrared spectroscopy (NIRS) and ultraviolet-visible spectroscopy (UV-Vis) – common to both methods is that the measurements must be deciphered with chemometrics, which is Professor Rasmus Bro’s scientific focus.

Rasmus Bro, a professor at the Department of Food Science at the University of Copenhagen, received the first Nils Foss Excellence Prize, which is considered the Nobel Prize of the food science. The motivation for awarding him the prize was, among other things, the work he has done to disseminate Process Analytical Technology in Denmark. Much of this work happens through the ODIN consortium, which Rasmus Bro started in 2003 in order to provide companies in the food and pharmaceutical industries easy access to international expertise in data analysis, including PAT.

ODIN is anchored at the Department of Food Science (FOOD) at the University of Copenhagen. The consortium gives industry access to the latest knowledge about the above-mentioned methods through courses, workshops and seminars and access to researchers who can advise on the implementation of the methods in the company. Read more at about ODIN here.