The importance of camel milk was emphasised when the Minister for Livestock and Fisheries Professor Fekadu Beyene recently turned out to be an external examiner at Yonas Hailu’s PhD defence at Haramaya University. The Department of Food Science (FOOD) at the University of Copenhagen and DTU are partners in the research project Haramaya Camel Dairy, which aims to create a camel milk basaed Ethiopian dairy culture for the benefit of the poor and drought-plagued country. 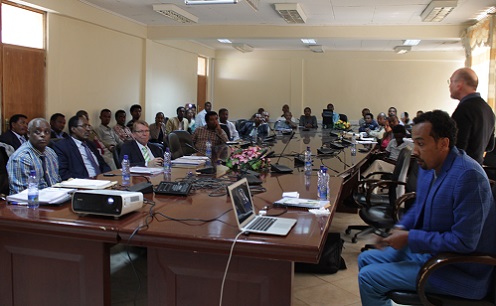 Yonas Hailu recently defended his PhD based on the research project Haramaya Camel Dairy, which the Department of Food Science (FOOD) is a partner in. His PhD deals with producing camel milk cheese with a long shelf life and his Danish principal advisor, Professor Richard Ipsen from FOOD, was somewhat surprised that Fekadu Beyene, Ethiopian Minister for Livestock and Fisheries, was an external examiner.

“It turned out that the minister, who studied dairy technology in Norway, had read the dissertation thoroughly and had a number of very relevant questions and comments. It started a good discussion, which I as a supervisor obviously appreciate. Yonas is very skilled and answered very well,” explains Richard Ipsen.

The Minister’s interest illustrates how important camel milk is for Ethiopia.

”There is a large surplus of camel milk in the eastern part of Ethiopia and a large group of poor semi-nomadic people who travel around seeking grazing for their camels. If you start creating small dairies that could process their production of camel milk to cheese, for example, they could get a better price for the milk,” explains Richard Ipsen.

Camel milk is very rich in nutrients and it is also a potential export product to the Arabian Peninsula.

“On the Arabian Peninsula there is a pronounced belief that camel milk is a healthier alternative to milk from a cow. It has not yet been thoroughly documented, but if you are allergic to cow milk, you are not necessarily allergic to camel milk,” says Richard Ipsen.

The researchers in the Haramaya Camel Dairy project are working to establish a local group of researchers who will investigate how to treat camel milk if you want to process it into dairy products. The milk behaves very differently from cow milk, which is why it is impossible to make cheese using the usual methods known from cow milk. It simply becomes a thin slurry. The researchers succeeded in making cheese from camel milk using camel enzymes instead of enzymes from cows, so the cheese can be produced in a way that is both safe and practical in Ethiopia. And Yonas Hailu’s PhD looks at how camel milk cheese can be stored in brine.

Camel milk is still a mystery

That the camel milk behaves so uniquely is also interesting for the researchers.

“We had a student put some camel milk powder into cow milk and warm it up to see whether an additional protein supplement could result in thicker yoghurt. We usually add extra protein to cow milk when we make yoghurt and this works fine with protein from cow milk. But even though we added a lot of protein, equivalent to 1.5 % extra, it did not work at all with proteins from camel milk. On the contrary, the yoghurt was surprisingly much thinner with the extra protein supplement,” says Richard Ipsen, who would like to dig more into what it is about the texture of the camel milk that is so much different from cow milk.

In early 2018, the Haramaya Camel Dairy project will end with a seminar in Ethiopia, where the project’s second PhD student will defend his thesis. In addition, Richard Ipsen expects that seven MSc. theses will be completed.

“We feel that things are coming along very well with the project and have trained some people who are interested in continuing. For example, one of our finished MSc. students is not interested in pursuing a PhD, but wans to start a business in this field and this also supports our aim with the entire project – to create opportunities to take far better advantage of the great resource that camel milk is in these parts than it does today,” says Richard Ipsen.

In future, the research team hopes to get a research grant that will allow them to dive even deeper into the structure of the camel milk in order to find out what makes it so different.

It has a budget of 9 million kroner and is financed by Danida.