José Amigo Rubio from Department of Food Science has received the 2014 Chemometrics and Intelligent Laboratory Systems Award due to his significant contribution to the development and dissemination of chemometrics worldwide.

The award was presented to José Amigo Rubio at the XIV Chemometrics in Analytical Chemistry conference in Richmond, Virginia, USA, the 12th of June, 2014. The winner is represented by a chemometrician, not older than 40 years of age, who has contributed significantly to the development of chemometrics in the last 5 years. He won thanks to his substantial publication record and especially to the collaborative character of his vision about Chemometrics coupled with the amount of PhD courses, advanced courses and, in general, teaching, that he has developed in Denmark and abroad to spread this discipline. 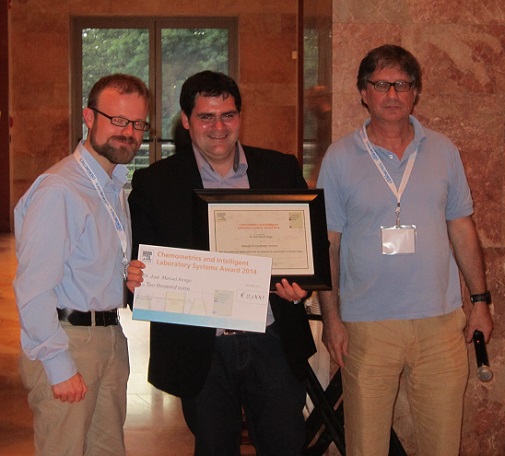 José Manuel Amigo’s reaction upon winning is represented by a mixed feeling. He declares, just after having received the award: "I feel really happy, of course. I still cannot believe it. It is a big responsibility that your name is together with previous awarders (for example, Rasmus Bro). So it is also a little bit scary!"

According to Professor Rasmus Bro, José Manuel Amigo has well-deservedly won the 2014 Chemometrics and Intelligent Laboratory Systems Award. He says: "This award is highly prestigious and has only been given to a small select group of people, for all of which it was obvious that these were or would be future trendsetters in chemometrics. This year is no exception." He continues: "There are few continents and few chemometricians that have not worked together with José Manuel Amigo. Even at this early stage of his career, his impact in chemometrics and in the application of chemometrics is breathtaking. He has done high impact research e.g. in analysis analytical chemical data (chromatography) or even more so in so-called hyperspectral imaging".

This prestigious award was established to stimulate the careers of young scientists by recognizing noteworthy accomplishments in the field of chemometrics. This is the sixth time that this award is given. In 2000,the award was given to Professor Rasmus Bro.