The Department of Food Science (FOOD) at the University of Copenhagen is making a course in Near-InfraRed Spectroscopy (NIRS)for measuring food quality compulsory on the bachelor level.

This article is also published in the journal Plus Proces no. 10/2016 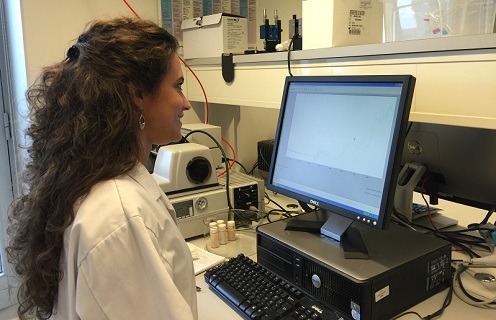 Researcher working with NIR spectroscopy in the laboratory at the Department of Food Science (FOOD), University of Copenhagen. Picture: Lene Hundborg Koss

Postdoc Klavs Martin Sørensen from the FOOD section “Chemometrics and Analytical Technology” is in charge of the course, which will be introduced in the technology specialisation of the bachelor’s programme “Food and Nutrition” for the first time in January.

Near-infrared spectroscopy is an analytical method that can be used to determine the levels of chemical components like water, protein and carbohydrates in food. The method is called a fast method, because it requires no special sample preparation with poisonous chemicals or specialised knowledge – the sample can be taken directly from production and analysed and the results are available within seconds. An analysis is carried out by characterising infrared light that has either passed through or been reflected from a food. With knowledge of how the light interacts with the food, a “fingerprint” of the chemical composition can be taken, from which the content of specific components can be calculated. This could be for whole groups of components, such as the total fat content, or very specific substances, for example, a specific fatty acid. The method is completely non-destructive, as the light does not affect the sample.

“The students have previously had the option of choosing the course and learning about the technology on the graduate level, but now we are offering it from the beginning and as a compulsory course, because they will encounter the technology more and more frequently when they start working in the food industry,” says Klavs Martin Sørensen.

When using the traditional methods for analysing food, you typically only take samples at the start and end of a batch because of the cost and analysis time – the samples take so long to analyse that you might only be able to regulate the quality of the next batch.

“With an NIR instrument you can take samples more often or do it online while the production is running, so you measure continuously and are thus able to find all of the little variations during production. Measuring not just a single parameter, but many parameters at the same time, which can be determined in a single measurement at a single moment – is called Process Analytical Technology (PAT) or SPC (Statistical Process Control), because you can always take the changes seen in the production and feed back to where you take in the raw materials – and thus get a more consistent quality of production. In the course, students will learn how to record near-infrared measurements under the most optimal conditions and also what you should consider when sampling, for example, inhomogeneous or complex foods,” says Klavs Martin Sørensen.

A good example of the many advantages of near-infrared spectroscopy can be found in contrast with the traditional method for determining the protein content of a foodstuff. Here you would carry out a Kjeldahl analysis, which requires quite harsh chemicals, a fair amount of time for each analysis, special laboratory facilities and specially trained personnel. 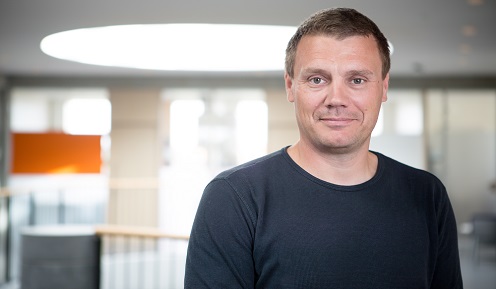 Postdoc Klavs Martin Sørensen from the FOOD section Chemometrics and Analytical Technology at the University of Copenhagen is in charge of the course, which will be introduced on the technology specialization of the bachelor program "Food and Nutrition" for the first time in January 2017. Picture: Daniel Schultz Madsen

The Kjeldahl method measures the total nitrogen content in the food, which is then equated with the protein content. When Chinese milk powder manufacturers put melamine (a cheap nitrogen compound) into milk powder to stimulate higher protein content in 2008, hundreds of thousands of people, including many infants, became sick and at least six children died. The manufacturers tried to get the laboratory measurements to show a higher content of protein in their milk powder and thus get their customers to pay more.

“If you had calibrated a chemometric model based on a simple near-infrared spectroscopic measurements, you would have quickly found that there was no additional protein, but that there was a contaminating component present and would thus have been able to detect the cheating before it had fatal consequences. The method is widely used in the industry and with the course we will provide students with the tools needed to be able to verify the authenticity of raw materials and foodstuffs and to detect similar problems. We are proud of the course, as I do not think there is an equivalent elsewhere. We combine theory, practice and industry in an intensive compulsory course, thus contributing to the food education at the University of Copenhagen maintaining its status as one of the world’s best and making the education even more relevant to the students,” says Klavs Martin Sørensen.

The Department of Food Science (FOOD) at the University of Copenhagen is hosting the 18th conference on near-infrared spectroscopy, entitled "NIRS at work in industry”, which will be held at Bella Sky in Copenhagen from 11 to 15 June 2017. Over 400 delegates are expected to attend, and FOOD has organised courses for both industry and students in e.g. calibration, sampling and Process Analytical Technology (PAT).