Wine is science and art

You can know a lot about wine – its chemical and microbiological processes, but you can never understand and control it completely. This makes the production of good wine an art, that requires a certain feeling with the product and a lot of experience says winemaker Nathalia Kruse Edwards. Nathalia is graduate in Food Science and Technology from the Department of Food Science at the University of Copenhagen, with a rare specialisation in wine science (oenology), from the University of Adelaide in Australia. 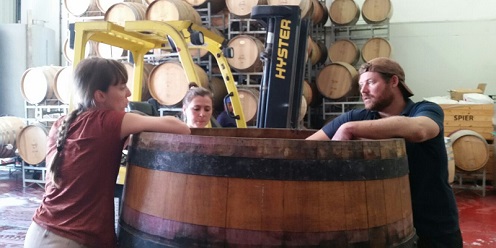 Nathalia Edwards (left) in conversation with colleagues at a winery.

Nathalia Edwards is Application Manager for ‘’Wine and beverages’’ at Chr. Hansen A/S and has been in this position for four years. In the international wine community she is described as a research winemaker.

How did you become a winemaker, or oenologist?

I have a bachelor’s degree in Food Science from the Department of Food Science and a master’s degree in Food Science and Technology with a specialisation in oenology, the science of wine. In short, this means that I can make wine. I could not take the oenology courses in Denmark, so I went to the University of Adelaide in Australia, for one semester to study them there. The courses were about the chemical and microbiological processes in wine and the sensory science, on how to taste wine.

Chr. Hansen is a global bioscience company that among other things produce malolactic bacteria and yeast, which are used by winemakers around the world. Nathalia Edwards acts as technical support and is responsible for testing new applications and products at wineries.

“I work with yeast and bacteria for the wine industry and my responsibility is in the area, where knowledge from the laboratory is implemented in the real world. If we in the laboratory have found some new strains of yeast or lactic acid bacteria, I typically test them at wineries that are interested in fermenting a wine with slightly different characteristics than they are used to. This is done by dividing the grapes into two tanks. One tank is fermented as usual, while I take care of the other one. So I travel a lot during the winemaking seasons, when the wineries is already very busy,’’ she says.

What is the busiest time of the year for a research winemaker?

There are two wine seasons because I travel to both the northern and southern parts of the world. In Europe and the United States, September and October are typically the most hectic, while in Australia, New Zealand, South Africa and South America it is February and March. Typically, I follow trials at the wineries for periods of two to seven weeks. I set up the trials and return later to take samples and to check that the tested wine is still in the tanks. It might sound a little strange, but sometimes I have seen that the tested wine has been mixed with some other wine, so we have to start all over with the trial. I work with local laboratories and send samples back to Chr. Hansen in Denmark for analysis. Typically, I have a great amount of data to be compared. It could be to find out if the malolactic fermentation is going as expected, or if there are biogenic amines, like histamine, in the wine, which we do not want since this is the compound that causes headache after drinking wine. It could also be the taste that is analysed. From the results of the analysis, we find out if there is anything we need to adjust – for example the temperature in the tank. Each trial results in two different wines that I taste together with the winemaker to see if we have achieved what we wanted.

Are you also the one selling the yeast to the winemaker?

You could say that I am the link between sale and innovation. I am not at the winery to sell, but as technical support. Some of the wineries I visit already use our products and some don’t. If my work turns out well, we might get a new customer. The winemaker might want to try to produce a wine without sulphur, which is the most commonly used preservative in wine. There might also be an urgent problem with a wine which simply isn’t good enough. But, I do not do direct sales, that we have a sales team for.

You also got some practical experience from Australia… 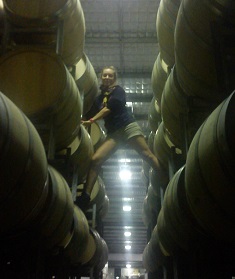 Nathalia Edwards at the Vasse Felix winery in Australia

While I was in Australia I decided to slightly postpone my studies in Denmark. I tasted some different wines and ended up applying for a job as cellar hand at the Vasse Felix winery at Margaret River in south-western Australia. This is where some of the best wines in the continent are produced. I worked on the white wine team and was among other things responsible for stirring the Chardonnay barrels, so I crawled around over hundreds of barrels, stirring the lees after fermentation - a process called batonage.

When I came to Australia, it became clear to me that I had found my place and today I could not imagine any other education. I am super nerdy and very scientific in my way of thinking, but I’m also very creative. Wine is a mix of science and art. You can know a lot about wine, but much of good winemaking depends on feeling. It is the most complex food I know, so I wanted to understand it. There are so many steps in the process, including when and where the vine is planted, how the weather has been, when the grapes are harvested – plus the entire fermentation process where it turns into the product itself.

What part of your degree from FOOD do you use most in everyday life?

I especially use my basic understanding of the microbiology in my daily work. My master’s programme at FOOD has also given me an understanding of different analytical methods, such as GC-MS spectroscopy. I know the different types of analysis and understand their benefits and limitations, which means that I can go to different laboratories around the world and look critically at their results. It was also my basic knowledge of microbiology and chemistry that made it easy for me to take the oenology specialisation in Australia.

‘’There are two fermentations in red wine. First is the fermentation of the yeast, in which the sugar is converted into alcohol. Then 95 per cent of all red wine worldwide goes through malolactic fermentation with lactic acid bacteria that convert malic acid into lactic acid. This gives the wine a more rounded flavour and microbiological stability. Most of the wine flavour is formed during fermentation, so the choice of fermentation is crucial to the final wine.’’