Supercontinuum lasers can lead to better bread and beer

Researchers from the Department of Food Science (FOOD) at the University of Copenhagen in Denmark are the first in the world to have analysed whole grains with long near-infrared wavelengths using a new type of light source, the supercontinuum laser. The research has significance for our knowledge of food ingredients and may, for example, eventually lead to better quality of bread and beer. 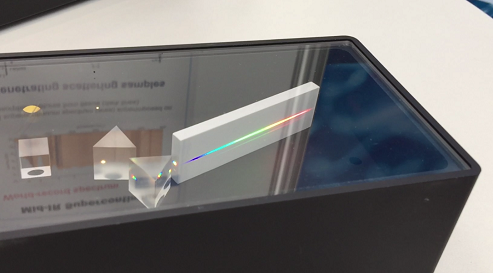 Technologically, the supercontinuum laser has undergone extensive development since the turn of the century due to the development of the photonic crystal fibres on which the laser is based. The project Light & Food (see the box) investigates, among other things, how to use this super-powerful laser to analyse food.

“The supercontinuum laser has made it possible to measure very small objects rapidly and with high energy. A supercontinuum instrument can therefore potentially be used to measure whole grains and thus find grains with, for example, fungal or insect attacks, or to sort grains by baking, health or quality parameters,” says Tine Ringsted, a postdoc at the Department of Food Science at the University of Copenhagen. 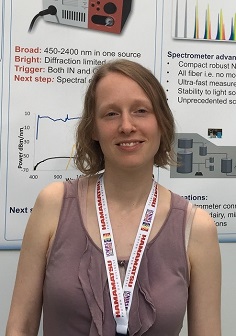 Tine Ringsted, postdoc at the Department of Food Science at the University of Copenhagen. Picture: Lene Hundborg Koss.

By measuring each grain you can more accurately observe the variation that naturally exists among grains from the same field and even from the same straw. The non-destructive and rapid measurement of individual grains can therefore be used in plant breeding to find desirable properties or in industrial grain sorting to increase quality. A possible industrial application could be to measure the content of the dietary fibre beta-glucan. Beta-glucan in barley and especially oats has health-promoting properties such as lowering of serum cholesterol, increased satiety and stabilisation of blood sugar and insulin levels after meals. Conversely, in the brewing industry, they are not interested in high concentrations of beta-glucan, as it can clog filters and create a cloudy precipitate in the finished beer called “grandmother’s cough”.

Measurements on barley flour and barley discs have previously shown some information rich wavelengths, but it has not been possible to measure through the barley grains at these long near-infrared wavelengths due to not having enough energy from the traditional spectrometer lamp.

“The supercontinuum laser’s collimated light beam with high energy meant that we could measure through the entire barley grain at the information-rich wavelengths. By using multivariate data analysis (chemometrics) we could generate a mathematical regression model that could predict beta-glucan content from 3.0-16.8 % in barley grains with a margin of error of 1.3 % beta-glucan,” explains Tine Ringsted.

Laser based seed sorting increases the value of beer and bread

“A seed sorting will mean that you can obtain some grains that have health-promoting properties for use in bread, for example, and some grains that are extra good for beer. This will give both products a higher value without doing anything, but sorting the grains,” says Tine Ringsted, who believes that food analysis with supercontinuum lasers will become a new breakthrough in the food industry, but that it will take some years because the development is based to a high degree on interdisciplinary research, where needs and technology has to fit together.

“It is one thing, for example, to have an instrument that can measure very rapidly and provide accurate answers, but in order for it to be practical, you must also have a sample holder that allows you to measure a large number of grains in a short time,” explains Tine Ringsted, adding that there is already a Swedish company (BoMill), which has developed a sample holder that can handle three tons of grains per hour, but they measure the grains at shorter and less informative wavelengths.

Video from ICNIR conference 2017 in which Tine Ringsted describes the difference between the supercontinuum laser and a traditional laser.

Measurement of beta-glucan in barley grains is just one example of how a supercontinuum laser can be used. In addition to single grain measurements, the Light & Food project has also examined the supercontinuum laser used in a new robust spectrometer that can potentially measure many places in a food production system. For example, this could be used in the dairy or brewing industry to follow a product from start to finish. In addition, there is a theoretical potential for using the supercontinuum laser for the rapid measurements of gases - for example, aroma compounds or ethylene which act as a gaseous plant hormone from ripening fruits.

“A supercontinuum laser provides even more options for food measurements, so it offers great potential for improving the quality of our food in the future,” says Tine Ringsted.

Near-infrared spectroscopy is a fast and non-destructive analysis method, making it a very useful technology for measuring the chemical composition of food. The Department of Food Science at the University of Copenhagen, Denmark, is participating in the Innovation Fund Denmark project entitled Light & Food, which aims to develop a new type of light source for near-infrared spectroscopy, the so-called supercontinuum laser. The new light source combines the collimated beam seen in a laser with a wide range of wavelengths typical for a lamp. The supercontinuum laser can also be connected to fibres and it is far brighter than a traditional light source. It therefore has the potential to shine through all kinds of foods and provide more accurate information about the content - or tell something about the content that you have not previously been able to analyse.

The Department of Food Science is working in the Light & Food research project in order to investigate which foods the supercontinuum laser can advantageously be used to analyse. In her PhD project, Tine Ringsted has used the focused supercontinuum laser to measure beta-glucan through intact barley grains with long near-infrared wavelengths. In addition, the project has also shown a theoretical potential for gas measurements of, for example, aroma compounds or ethylene, which regulates the maturation of many fruits. Light & Food has also developed a new robust spectrometer that has potential for online measurements in the food industry. The title of the PhD project is: “Near infrared spectroscopy of food systems using a supercontinuum laser,” and Professor Søren Balling Engelsen is the principal supervisor.