Umami taste and kokumi mouthfeel can help reduce the salt content in foods while still maintaining the pleasant experience of eating your dinner. You can boost these two sensations by using ready mixed spices or by cooking with specific foods and ingredients that can help you to enjoy your meal while cooking it with less (or even no) salt. 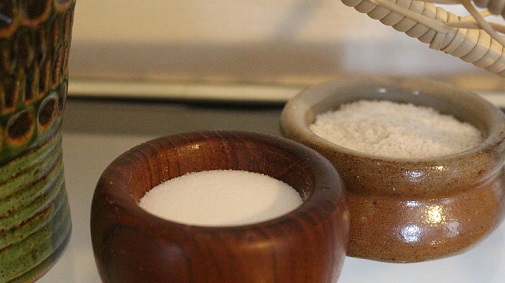 Salt is the most common ingredient in most food dishes and since ancient times has been used for the preservation of food. It reduces water activity (a parameter that indicates how available the water is for the microorganisms to grow) and thereby prevents food spoilage due to microbial bacteria. This was crucial centuries ago, but today this problem is solved in many different ways, such as by using domestic fridges and freezers. Nowadays, the main reason for using salt is because saltiness is very appealing. At the same time, salt boosts some tastes, while it masks others. For example, it is well known that in the appropriate amount, salt reduces bitterness, while it boosts the overall flavour of different foods, not only in salty ones: for example in cookies. Salt also plays a big role in the texture of meat products, dry and fermented fish and cheese; for instance, a frankfurter sausage made with no or a reduced salt content, loses a lot of water during the processing and consequently, its texture becomes crumbly and it is then difficult to slice.

However, salt is also known to be one of the main contributors to the global pandemic of high blood pressure. Therefore, reducing salt levels in food is important for health reasons. However, still we have to keep an eye on food preservation and texture issues, although undoubtedly, maintaining food taste and flavour will be the main problems to be addressed when reducing the salt content.

If we concentrate on taste, there are a variety of strategies to reduce the salt content in food practised by food companies around the world. Some of them work fine, some not so good. One of the first approaches since many years ago was to replace standard salt (sodium chloride) with potassium chloride. This tastes somehow salty, but it also possesses bitter taste. Nevertheless, it is quite commonly used, especially by people with hypertension, as a straightforward way to replace salt, and there are many products on the market with reduced salt that contain this ingredient and that are aimed at people with this condition. Other salts, like potassium lactate, or compounds such as L-lysisne have also been tried. But they are either not salty enough or have a salty flavour but accompanied by other off-flavours as well. So these replacement strategies are mainly used in products aimed for people with very strong reasons to cut the salt content, typically because of certain illnesses. These methods are still commonly used, but it could be claimed that none of them really lead to the same flavour quality in food as that obtained using standard salt.

The umami taste, which is one of the basic tastes, can be described as “a pleasant savoury taste”, and is produced by glutamate salts and nucleotides. It has been shown to be a useful tool to utilize to reduce the salt content in foods without compromising the taste quality. One potential approach in this regard is using compounds with a pure umami taste, like monosodium glutamate (MSG), whose use as a food ingredient was first discovered and popularized in Japan. However, many people are not happy with using food additives in regular meals. An alternative is thus using natural ingredients with a umami taste, e.g. hydrolyzed proteins, dried seaweed, dried tuna or fermented soya. All those have high levels of compounds with umami taste. The same goes for Parmesan cheese, dried mushrooms and tomatoes. The umami taste from these products will ensure that the food flavour will be boosted and at the same time, it will compensate for the missing salt. Of course, it is key to keep an eye on the ingredients, since some of these (for example, soya sauce) are very high in umami compounds, but also in salt content at the same time.

A more recent strategy to reduce salt in food without compromising the quality is to take advantage of the so-called kokumi taste. The term “kokumi” is used for flavours that cannot be represented by any of the five basic taste qualities. Kokumi can be classified into four profiles, namely thickness, continuity, mouthfulness and harmony of taste. Compounds with kokumi properties (mainly peptides) increase the perception of other tastes, especially saltiness and umami; as such, with the same amount of salt, a food rich in these kokumi compounds will be perceived as saltier and more flavourful.

So, the question is, where can such compounds be found? One possibility already in the market is using specific compounds showing kokumi; this has proven to be very effective in boosting the umami and salty taste of soups and other recipes. Another possibility is using some natural ingredients or raw materials high in this kind of compounds, e.g. cheese powder (warning: this also contains salt), garlic or legumes.

A totally different feeling to taste or kokumi is the feeling that is perceived when hot food ingredients hits the final receptors of the trigeminal nerve in the mouth; for example, ginger and chilli. These food ingredients don’t produce at all a salty taste, but by using hot spices the consumer can accept lower amounts of salt in recipes without compromising the overall flavour and their liking of that dish.