What if your refrigerator could tell you when it contains tainted food that shouldn’t be eaten? Maybe it would help you avoid suffering a bad stomach ache or even worse. This was not just a distant thought for PhD student Bhaskar Mitra at the Department of Food Science (FOOD), University of Copenhagen, as this idea helped him win an award in the 2016 Venture Cup National Start-up Competition. 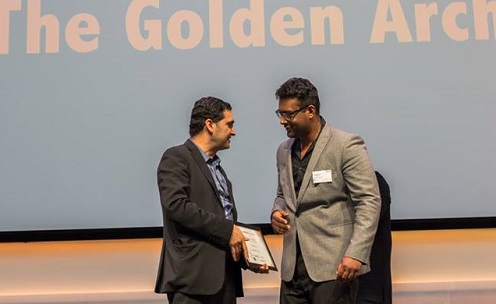 PhD student Bhaskar Mitra at FOOD won the Social Media Award in the 2016 Venture Cup National Start-up Competition. His idea about developing a food sensor that can detect harmful toxic compounds inside a fridge was selected over more than 500 applications for the Idea Phase: Products and Devices category. His idea was for the sensor to be embedded in fridges as an intelligent tracking device to inform consumers about the status of their food.

Other awards included the Silicon Valley Trip, Alumni Battle Award and the Category Award for Industry Tech, Health Tech, Mobile and Web as well as Products and Devices segments.

“Our team, 'The Golden Arc', won the Social Media Award and a cash prize of 5000 DKK. The judging criterion here was based on how we could promote our idea to a large audience to win their votes as the best idea in our category. A lot of teams participated in the early stages, and we were happy to emerge first among the teams. Then in the finals, we were judged on a wider basis, including the idea’s potential social impact, our business model, the prototype mock up and our strategy to penetrate the Scandinavian market with reference to tailoring our efforts towards end users”, said Bhaskar Mitra who was team leader.

He plans to spend the prize money on developing the device in his home country: India.

The Golden Arc team consisted of: