Already at the age of 50, we begin to lose muscle mass (called sarcopenia), which increases our risk for diseases, resulting in a loss of quality of life and costing society dearly. But if we easily can screen all older people for degrees of sarcopenia, it will be possible to take preventative measures that could delay the condition and may prevent it from becoming debilitating. That is why researchers at the Department of Food Science (FOOD) at the University of Copenhagen are looking for a new biomarker that can detect the risk a person has for developing sarcopenia in a fast and cheap way. 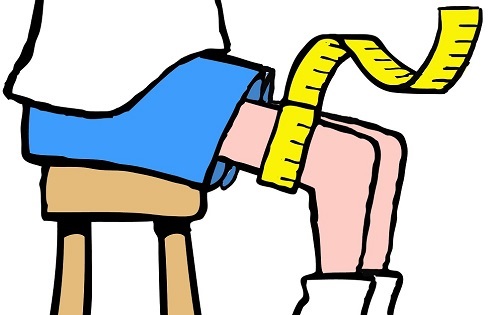 It is the researchers’ hope that the risk of developing age-related loss of muscle mass in the future can be predicted by taking a blood sample and making a lipoprotein profile. Today, sarcopenia is diagnosed by taking a so-called DXA scan of the thigh and testing the physical strength of the elderly.

“Our specific task is to find a new biomarker for sarcopenia that is faster and cheaper than the method we already have. If we succeed, it will be possible to screen all older people for the tendency to lose muscle mass and offer suggestions for a corrective diet and physical activity. Today, sarcopenia is a major burden for the elderly and for the national economy,” says Professor at the Department of Food Science (FOOD), University of Copenhagen, Soren Balling Engelsen who is head of the section Food Analytics and Biotechnology.

It takes up to a week to check the blood sample using ultracentrifugation, whereas researchers can map the lipoprotein profile by using NMR in less than 20 minutes.

The lipoprotein profile reveals the distribution of fat particles in the blood, including the “good” cholesterol” and “bad” cholesterol. The latter is typically measured with clinical kits, which is a quick, but not comprehensive method, as it does not include lipoprotein subtypes.

245 people over the age of 65 are participating in the research project CALM, which is one of 18 projects at the University of Copenhagen which has received grants from the university’s Excellence Programme for Interdisciplinary Research. The 245 participants were health examined and randomly divided into groups that will follow different programmes of physical activity and dietary supplements. Illustration: Newlin and Engelsen.

The blood samples to be tested and the lipoprotein profiles that come out of it, come from 245 people over the age of 65 who, over the course of a year, will supplement their diet with whey protein and will follow three different programmes: no training, easy home-based workouts and intensive supervised training. The research is in fact part of two research projects, CALM and COUNTERSTRIKE, which are also studying whether protein supplements and/or daily physical exercise can prevent or delay sarcopenia.

The elderly have been health assessed at Bispebjerg Hospital, where they have measured a number of different medical and physiological parameters, which together give a good picture of each individual’s state of health and physical performance. And it is this health description that researchers from FOOD are now trying to retrieve through the elderly lipoprotein profiles.

Professor Soren Balling Engelsen and his team are going to map the lipoprotein profiles to describe the health (the metabolic state) of the participants (a health characterisation using metabolomics – se illustration below).

Metabolomics is studying the conversion of substances (metabolites) – such as substances from food – in biological tissues/fluids (for example from a person’s urine, faeces and blood). When dealing with the blood, metabolomics involves a collective characterisation and quantification of all the metabolites as well as the lipoprotein content. The result of a metabolomics study is thus a physical chemical “fingerprint” of what has happened in the body. This fingerprint can be used to detect deviations from a given normal state using multivariate data processing (chemometrics). NMR is just one of several analytical methods used for metabolomics; two other widely used methods are gas chromatography coupled with mass spectrometry (GC-MS) and liquid chromatography coupled with mass spectrometry (LC-MS). Illustration: Newlin and Engelsen.

In the blood, you can find not only metabolites originating from the cells and internal organs, but also metabolites originating from the breakdown of the diet, as well as metabolites produced by the breakdown of food by the bacteria in the intestine. The researchers hope that the blood’s metabolome can be verified and complemented with the results from the intestinal microbiota and from the baseline study they can already confirm to some degree an Irish research result that shows that there is a fairly close connection between the composition of the intestinal flora and e.g. physical strength.

“But we are not yet finished with the characterisation and need to focus our studies more toward the classic measures for sarcopenia like DXA scanning (scanning of thigh muscle and bone, ed.) and a number of physical parameters that look at, for example, how many times the participants can sit up and sit down within a fixed period, how strong their grip is and more,” says Soren Balling Engelsen. 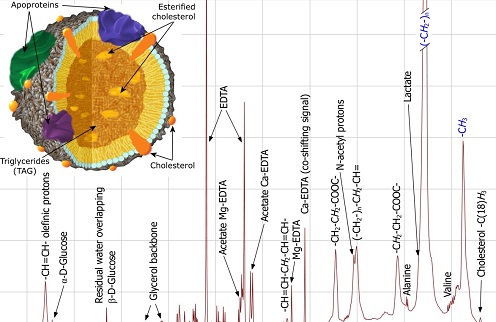 The illustration shows an NMR spectrum of blood plasma. In the top left corner, you can see the structure of a lipoprotein.

The size of the lipoproteins tells us about health

It is known that the size and density of the lipoproteins are crucial to how well the metabolism of fat and energy takes place in the body and whether the fatty deposits build up in the arteries (calcify).

“Differences in the lipoprotein profile can potentially be defined as a biomarker – and we are therefore looking for deviations in the profile that might, together with other information, show whether a person is headed for sarcopenia. A biomarker does not have to be a single substance (for example, cholesterol, blood sugar or another blood metabolite), but will much more likely be a pattern in the lipoprotein profile – also called a biocontour,” says Soren Balling Engelsen. 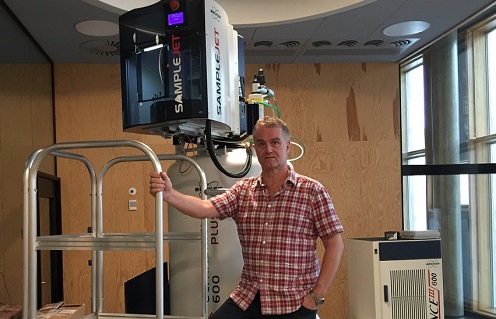 Professor Søren Balling Engelsen by NMR scanner at the Department of Food Science at the University of Copenhagen. Picture: Lene Hundborg Koss.

“It is difficult stuff – not least because CALM and COUNTERSTRIKE are interdisciplinary research projects – so as technologists we are working with humanists towards shared goals and we need to clarify the results with each other in order to move forward. It is this interdisciplinary approach that makes these projects the most interesting I have ever been involved in,” says Soren Balling Engelsen.

It is not only about finding a method that can show whether a person is beginning to develop sarcopenia. Or whether you are able to take preventative measures in the form of protein supplements, dietary changes and physical activity.

“We must also be able to communicate our knowledge to the elderly in a way so that they will want to change habits and know why and how it benefits them, and topics like “the good old age” and “the good death” are discussed in these projects and the results are certainly not obvious,” says Soren Balling Engelsen.

Besides reflecting older people’s health through metabolome and microbiomes and comparing the results with the health assessments from Bispebjerg Hospital, other aspects are being studied at FOOD. The protein supplement that participants are drinking is for example being tested for taste and acceptability in the FOOD section Design and Consumer Behavior. This research is led by Associate Professor Armando Perez-Cueto.

In Denmark, the average life expectancy is increasing and the number of elderly above 65 years is expected to increase by up to 50%. Therefore, the importance of ensuring good health and a high quality of life at high age is becoming increasingly important. One of the challenges for a good quality of life is age-related loss of muscle mass and strength, called sarcopenia. Sarcopenia is already measurable even in the healthy part of the population from the age of 50.

The research project CALM reveals, in an interdisciplinary forum of researchers from the humanities, health sciences and natural sciences, the challenges of sarcopenia and tries to come up with solutions on both a societal and individual level. In order to highlight all disciplines, the combined knowledge and methods from medical clinical trials, ethnological studies of everyday life, microbiology, sensory science, sociology and history with an innovation project resulting in recommendations, lifestyle concepts and product development.

You can read about the intentions of the project in the article ”Hurrah for the increasing longevity: feasible strategies to counteract age-related loss of skeletal muscle mass” published in the scientific journal Scandinavian Journal of Medicine & Science in Sports. (http://dx.doi.org/10.1111/sms.12415)

The research project COUNTERSTRIKE is an extension of CALM. This project is funded by Innovation Fund Denmark with 15.6 million kroner and is an interdisciplinary collaboration between the Department of Food Science (FOOD), Department of Nutrition, Exercise and Sports (NEXS) and the Saxo Institute (all part of the University of Copenhagen), Institute of Sports Medicine (Bispebjerg Hospital), a graphic illustrator, Amsterdam University, Arla Foods A.m.b.a., Unilever and Bruker Biospin GmbH. COUNTERSTRIKE is led by Associate Professor Dennis Sandris Nielsen from FOOD and the idea is to find a biomarker for sarcopenia.