The managing director of the research and innovation consortium BIOPRO, Jesper Bryde-Jacobsen, is educated as a dairy engineer. The education gives him a solid background for making strategic decisions, which are rooted in an understanding of biotechnological production and the consortium partner companies. For even though the BIOPRO partners manufacture very different products within the field of biotechnological production, the machinery in all of the companies are similar. 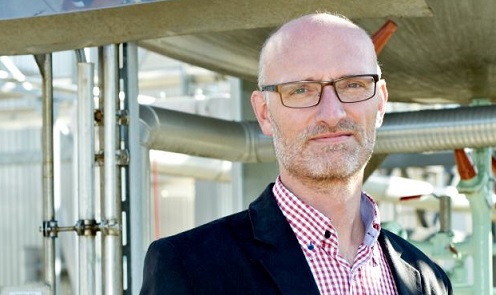 Jesper Bryde-Jacobsen is an example of a diary engineer who has created his own management job, as the core idea of BIOPRO is his own.

“It was developed together with a few production managers from Novo Nordisk and Novozymes in Kalundborg, who I knew because I was myself a director at NNE Pharmaplan, which is a subsidiary of Novo Nordisk. We thought that when we have some world leading production facilities in biotechnological production and when DONG has the world’s first demonstration facility for second generation bioethanol production, then we could work together to ensure that Danish research, innovation and development in large scale biotechnological production is world leading,” says Jesper Bryde-Jacobsen.

“In the 1990s, people talked a lot about how we should be a “knowledge society” and production was not the focus. In the 2000s, we became aware that production was a necessity. To ensure that we developed more quickly than the companies abroad, we wanted to create BIOPRO. We contacted the head of the Department of Food Science, Bjarke Bak Christensen, who one in the group knew, whereby the University of Copenhagen joined the group. Then came DTU Chemical Engineering and gradually more businesses joined, including CP Kelco, which has the world’s largest pectin plant in Lille Skensved,” says Jesper Bryde-Jacobsen.

The funds initially came from Region Zealand and the EU’s Regional Development Fund, and BIOPRO became a reality in 2013.

“What we want with BIOPRO is to change certain processes in factories so that they can deliver a higher yield, a higher capacity and a better quality using the existing factories and raw materials. We simply have to get more out of what we send into the factories in a way that makes the production more sustainable and more competitive,” says Jesper Bryde-Jacobsen.

Being a dairy engineer - what does that mean to you as managing director of BIOPRO?

“It means everything. As a diary engineer you get a broad understanding of unit operations and biotechnological processes, so you can quickly understand relationships and be a part of the dialogue with truly talented scientists and specialists from industry and universities. This makes it possible to create visions and understand what it takes to succeed in the projects,” says Jesper Bryde-Jacobsen.

But could you not obtain that with another education?

“Well, perhaps if I was a chemical engineer. But much of the production is all about the fermentation processes and various purification processes and when you look at the machines in these factories, they bear great resemblance to the machines in a dairy. We produce some different products, but use similar processes and machines. And when I am asked what these companies have in common, the answer is that they have some big tanks, some centrifuges, pipes, valves, filters – with liquids that are treated and flow through the systems,” says Jesper Bryde-Jacobsen.

What is it that motivates you in the job?

It is working with the major companies and universities on goals that will move things forward in the long run. It is great to be able to make a difference. For us it is about ensuring that research and innovation happens faster in Denmark than elsewhere in the world within the niche that is biotechnological production. BIOPRO has four spin-out companies this year – either start-ups or existing businesses that have a whole new product as a result of the innovation and research that has come out of the BIOPRO collaboration. In 2017 and 2018, we expect to create an additional 3-7 new companies and it is a job that is incredibly meaningful to me,” says Jesper Bryde-Jacobsen.

Enthusiasm made the difference

When Jesper Bryde-Jacobsen should choose an education in the mid-1980s, he was pretty sure it would be “something in the sciences or something in engineering,” but beyond that he was unsure.

“I had never been on a dairy before and I chose the programme because it was cool,” says Jesper Bryde-Jacobsen, who had done his research in advance, including talking to a dairy engineering student who made a big impression with his great zeal and enthusiasm for the subject. It was decisive for his choice.

What do you think was the best thing about the programme?

I think it was fantastic to do an internship. At the time, the internship was more than a year and I learned a lot. I travelled around with two large bags filled with my belongings and learned a lot about production processes in practice and talked with a lot of people. We started in Dalum with learning about what a dairy is. Afterwards, I had an internship at Randers Milk Central, where I made butter. At Thorup Dairy I made Danbo, Cheddar at Øster Tørslev Dairy and Danablu at Gedsted Dairy. Drinking milk and curdled milk at Fredericia Dairy. You really got to do a lot when you worked at the dairy at night with just a dairyman or two. The collaboration was close and you were part of everything that would take place in the production. The internship ended with the exam at Dalum,” explains Jesper Bryde-Jacobsen.

Jesper Bryde-Jacobsen is a good example of the many dairy engineers that are working with management. Statistics from the Danish Dairy Engineers Association show that 40 % of the members have leadership responsibilities and of those 44.3 % are at the senior executive level.

1988-1992 Production manager at Arla Foods. Here Jesper Bryde-Jacobsen worked with the optimisation of the production of their Danablu cheese. He also helped to establish one of the first biological treatment facilities at Arla and to implement the first ISO certification in the company

Biotechnology is any technological application that uses biological systems, living organisms or derivatives thereof, to make or modify products or processes for a specific use.

BIOPRO is a research and innovation consortium whose goal is to optimise biotechnological production so that the industry can remain competitive, create groundbreaking research and convert the innovations into new products that can create jobs and exporting companies in Denmark.

The consortium is made up of a number of leading companies that are engaged in biotechnological production as well as two universities. The partners are:

CAPNOVA – an investment and development company, the project manager for BIOPRO

DONG Energy, which has a leading position in the development of second-generation bioethanol

BIOPRO is financed by the partners and Innovation Fund Denmark, Region Zealand and the European Regional Development Fund, ERDF. By the end of 2014/15, the partners and the abovementioned contributors invested 128 million kroner in the center.