Come and hear about the latest food research

At 12 o'clock on October 23, you and your colleagues are hereby invited to a day of lectures with some of the country's most prominent food scientists at the Department of Food Science (FOOD) at the University of Copenhagen. They will talk about the research they are undertaking right now - research that will help society and industry to come through the first third of the 21st century well when it comes to food. It's free to join and everyone is welcome. 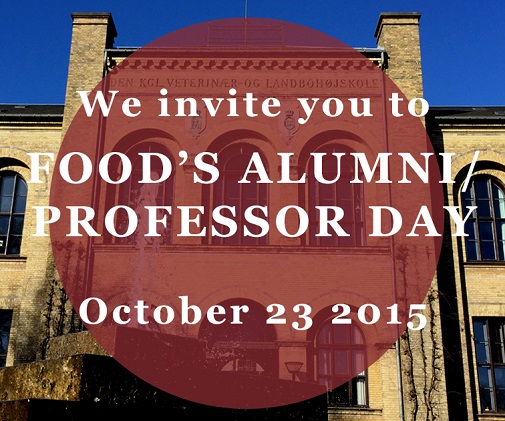 FOOD opens the doors to the combined professor inauguration and alumni event where we present a number of senior scientists and their research. You will have plenty of opportunity to see and hear about where the research is moving and ask questions on the various topics.

The lectures will be followed by a reception where there will be the opportunity to enjoy a snack and a glass of wine and talk with speakers and guests.

Register before October 10 by email to Lisbet Snedstrup Christensen, LSM@food.ku.dk

12:00 – Welcome by Head of Department of Food Science (FOOD) at the University of Copenhagen Bjarke Bak Christensen.

12:10 – Dairy Science through the eyes of an organic chemist by the Head of the FOOD-section Dairy, Meat and Plant Product Technology, Colin Ray

My presentation will be a bit of a whistle-stop tour of the areas of dairy and food science that interest me, and how I look at science through the eyes of an organic chemist.  My formal education is in organic chemistry and, in many cases, this is how I observe dairy science and technology.  I think about which molecules are present, how they react with each other under given conditions, how I can measure the outcomes of whatever chemistry is occurring and what this means for the dairy product in question.  In my presentation, I will give some examples of published research that I have conducted during my time in the dairy industry, mainly addressing the chemistry of UHT-treated milk, and how understanding the link between milk composition, processing and chemistry can allow us to contribute to the development of new types of dairy products.  I will also present some very new results from a project dealing with new enzymes for dairy applications.  Finally, I summarise some new projects that are just starting, addressing the Maillard and subsequent reactions in heated milk and new strategies for controlling this undesired chemistry, the enzymes, oligosaccharides and modern dairy processing.

I will introduce the area of food structure engineering and why it is important for industry as well as for consumers. I’ll discuss the colloidal structure of milk and highlight why differences between dairy species is highly important by presenting ongoing research on camel milk. I will also give examples of how molecular interactions between the inherent milk components and added ingredients affect final product quality. In addition, I will present recent work on how food structure affects satiety, how protein self-assembly results in the formation of nanotubes from milk proteins and will also introduce the complex phenomena involved in cheese melting.

13:10 – Umami and kokumi: from deliciousness to mouthfullness by Professor Jorge Ruiz-Carrascal

Umami and kokumi are Japanese terms referring to specific perceptions that positively contribute to the overall liking of savoury foods. Umami is known as the fifth taste and is mainly exerted by glutamate and nucleotides, while kokumi is a complex mouth feeling that is typically used to describe a sensation of ‘richness’ and ‘mouthfulness’. Kokumi seems to be linked to the presence of different compounds, but some peptides are among the main kokumi contributors in cheese, chicken broth and legumes. Some processing technologies, such as fermentation or dry-curing, boost the formation of compounds involved in both perceptions. A deeper understanding of such processes could contribute to developing strategies aimed at improving the liking of other foodstuffs and creating specific food flavouring ingredients.

13:50 – Biogenic amines in dairy products: the Good, the Bad and the Ugly by Professor Fergal P. Rattray

Biogenic amines are biologically active compounds formed by the microbial decarboxylation of amino acids.  Only specific species of lactic acid bacteria are capable of this catabolism, with histamine and tyramine being the most frequently reported biogenic amines in fermented foods.  The presence of biogenic amines is undesirable due to the fact that they elicit a toxicological response upon consumption of the food, with a broad range of symptoms such as facial flushing, burning throat, a tingling sensation, itching, hypotension, headache, abdominal pain and diarrhoea. Within dairy products, long ripened cheeses are most frequently implicated due to high levels of the precursor amino acids.  The presence of biogenic amines is a further source of concern as they can react with nitrites to produce nitrosamines, a class of compounds with known carcinogenic properties.  However, recently, new research has pointed to a potential positive aspect to biogenic amine formation, in which a histamine producing Lactobacillus reuteri strain appears to have probiotic activity and is able to suppress inflammation in the gastrointestinal tract.

14:20 – Trends in food fermentation – from delicate spoilage to one of life’s pleasures by Professor Lene Jespersen

The lecture will focus on the importance of fermented foods in our diet, the advantages obtained from fermentation, as well as new trends within food fermentation. The focus will be on the functionality and interaction of the microorganisms involved in different kinds of fermented foods and beverages, such as in dairy products, bread, meat, beer and wine. Recent research highlights within the fields of fermented foods, microbial biodiversity and strain identification, microbial interactions and bio-preservation will be presented. The lecture will also introduce some examples on how the lessons learned from fermented foods could be used to increase sustainability and value addition focused on new markets and collaboration partners in Brazil and Sub-Saharan Africa.

Colin Ray is head of FOOD KU-section Dairy, Meat and Plant Product Technology and has a PhD in organic chemistry and an MSc in analytical chemistry from the UK.  After spending some time at the Royal Institute of Technology in Stockholm, he commenced a career in commercial R&D for AstraZeneca in neuroscience medicines research.  During his decade at AstraZeneca, he supervised Masters and Postdoctoral researchers and undertook positions of increasing responsibility, including managing preclinical research projects addressing new strategies for the treatment of Alzheimer’s disease.  During this time, he developed an interest in how diet potentially affects disease states, which rather naturally lead him into reading more about food chemistry.  Colin Ray was able to pursue his interest in food science upon accepting a position as senior scientist at Arla Foods R&D, now ASIC, where, asides from project leading, he was asked to establish a research platform addressing functional enzymes.  As well as enzyme science, he worked with the quality aspects and chemistry of UHT milk, oligosaccharides, protein modification, sugar replacement and shelf-life issues.

Richard Ipsen is a professor in Food Structure Engineering and has been employed at the University of Copenhagen and/or the Royal Veterinary and Agricultural University since 1991. His field of research is to understand how molecular properties and interactions determine final product quality for food products. His main focus is the texture and microstructure of dairy products and his primary fields of research include milk protein functionality and modification of functional properties using enzymatic or other treatments. Richard Ipsen’s research focuses on acid milk gels, especially on understanding how exopolysaccharides produced by lactic acid bacteria affect texture and microstructure. Most of his research is performed in very close collaboration with the food and food ingredient industry as well as with a wide selection of national and international research groups. In addition to his research, Richard Ipsen has been extensively involved in teaching Dairy Science and Technology as well as on the BSc programme in Food Science.

Jorge Ruiz-Carrascal is a professor with special responsibilities in Meat Technology at KU since 2013. He has 24 years’ experience in the Meat Science & Technology Area, a PhD in Food Science (Univ. Extremadura, Spain), and Postdoc experience at the Foulum Research Center (Dk) and Cornell Univ. (USA). He was also an assistant and associate professor at the University of Extremadura (Spain). His background mainly deals with fresh meat and meat products’ processing, including the chemical, biochemical, structural and physical changes that take place during the different steps of a number of processing technologies (MAP, dry-curing, fermentation, cooking, smoking …). He is very interested in the formation/release of compounds with an umami taste in the dry-curing and low-temperature cooking of meats. He is also currently interested in kokumi and umami in meat protein hydrolyates.

Fergal Rattray was educated in Food Science and Technology at University College, Cork, Ireland; earning a BSc (1992) and PhD (1996). Following this, he spent the next 18 years working for the food ingredient company, Chr. Hansen, Denmark. In his early years, at Chr. Hansen, he was employed as a research scientist and worked in the research and development of dairy cultures, coagulants, molecular biology and the screening of bacterial strains.  He then moved to a commercial position as sales manager within the company, with responsibility for sales activities in Scandinavia, UK and Ireland. From early 2015, following his appointment as Professor in Dairy Biochemistry at the University of Copenhagen, he returned to the world of research and development. Through his previous industrial experience, he is well positioned to contribute to FOOD's understanding of the dairy industry and the institute’s ability to put greater focus on application-oriented research. Throughout his career, he has continuously published scientific papers in collaboration with various international universities and research institutes, and has also served as a reviewer for several journals within dairy science and technology.

Lene Jespersen is educated in Food Science and since she graduated from the Royal Veterinary and Agricultural University in 1989 she has worked with food fermentation and microbial interactions in both the private sector and at the university. She has held an industrial PhD in food microbiology since 1994 and has been employed at the University of Copenhagen/the Royal Veterinary and Agricultural University since 1995. In 2008, she was appointed as Professor (mso) in Global Food Microbiology and in 2013, was appointed a full professor in Microbial Ecology and Food Fermentation. Her main research interests are focused on food biotechnology, microbial interactions, the use of starter cultures for improving food quality and food safety as well as the effect of pre- and probiotics on gut microbiota. She has coordinated several larger national and international research projects. Moreover, she has been involved in several EU-funded projects and acts as an expert in the EU evaluation system. Lene Jespersen has published more than 100 peer reviewed scientific publications as well as a significant number of book chapters, proceedings, etc. within food microbiology.