Thomas Skov from the Department of Food Science has received a prize from HRH The Prince Consort's Foundation for his research as well as to extend the use of chemometrics in an industrial context.

Distribution of prizes from HRH Prince Consort’s Foundation took place at a reception June 2, 2014 at Fredensborg Palace. The researcher prize went to Associate Professor Thomas Skov. The prize was awarded for his internationally renowned and applied research. 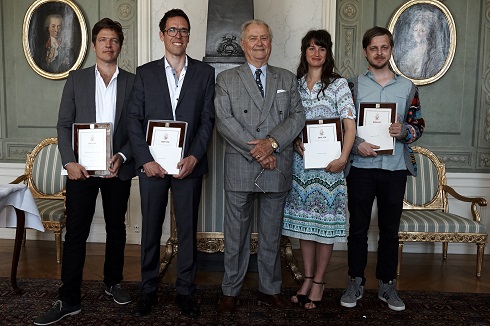 Thomas Skov's research focuses among other things on handling of chromatographic data, and is particularly directed towards use in the industry. He has developed several user-friendly mathematical tools in the form of MATLAB-based programs that are currently being used by Danish food companies such as Arla Foods and Chr. Hansen A/S. It is especially Thomas Skov's vision and work method of making chemometrics useful for industrial purposes, which ensured him the prize from HRH Prince Consort’s Foundation.

Thomas Skov has been active in the development of elements of the following:

Research aimed at use in industry

Thomas Skov is one of the initiators of collaboration with Stellenbosch University in South Africa. This research project deals with wine metabolomics and, optimization and analysis of wine aroma. The researchers in South Africa have, through chemometrics, been able to obtain greater knowledge of wine, and thereby increase the quality and yield of their production.

Thomas Skov is also a key player at KU behind the research in the biotechnology consortium BIOPRO. Through biotechnology research and development BIOPRO will create value for Denmark with the goal of maintaining and enhancing Denmark as an attractive place to put future production facilities.

The work method in BIOPRO, which is focused on utilizing each other's core competencies in a more direct way has already created solutions used in the industry and more solutions are on the way; These can save time and money and will create the basis for maintaining the close cooperation that exists between biotech companies, Danish universities and SMEs in order to ensure that Danish biotechnology is also a leader in the future.

Thomas Skov also teaches both introductory and advanced courses in chemometrics at the University, and he has been training over 200 Danish industry employees in chemometric methods, and how these techniques can be applied to problem solving and process optimization. He has thus made a wide network, which has led to several collaborations with industry both nationally and internationally.