Guided tour from trash to treasure by Gastronomic Playground

Science in the City Festival

Alongside the Euroscience Open Forum (ESOF) 2014 conference, the public outreach programme, named Science in the City Festival is taking place in Copenhagen from the 21-26 June 2014.

Gastronomic Playground is dedicated to show the audience how to convert fish bones into crispy chips, mash crackers with a pesto based on carrot tops, fried salmon skin with vinegar powder, Dandelion cappuccino and many other servings.

From Trash to Treasure  will teach you methods to avoid food waste, you could know and learn what happens during the several preparations in the kitchen and see and taste the final result.

Karsten Olsen, Associate Professor at Department of Food Science and mentor of Gastronomic Playground, gave a flash talk at the Wonder District, Saturday the 21st of June 2014. He declared:

“Garbage is something we as consumers do not consider to represent any value – this relates to packaging, vegetable peelings, carrot tops, fish skin and bones, and many other things. Also, foods that have exceeded 'sell-by date' or 'best before date' are discarded without thinking that it still can be eaten. It goes to combustion or is composted and the food has been produced for no use at all as an abundance product”.

Gastronomic Playground was also onboard Dana, Denmark´s largest research vessel docked at Amaliehaven in the heart of the city from 21-22 June. They were preparing, showing and serving food based on the Danish water’s raw material through unusual culinary techniques from the molecular gastronomy. A fun and educational event that have merged the studies about the eel population, the identification of fish stocks carried out on the ship and the research at the Department of Food Science. 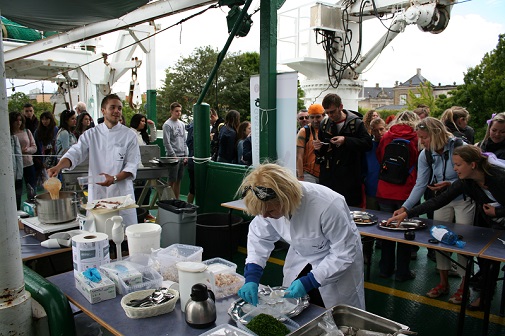 Science in the City is a free festival that invites families, students and other curious souls for an entertaining look into the world of science, flanked by leading scientists and inventive students from University of Copenhagen.

You can experience Gastronomic Playground at the Carlsberg headquarter in Valby, in the Wonder District, stand 33, every day from 10 a.m. to 8 p.m, but the 26th of June until 4 p.m.

The voluntary and unpaid student have developed all the recipes presented at “The Science in the City Festival” in their spare time over the last year and are now looking forward to talk about all the good qualities by converting waste into tasty food.

Meet Gastronomic Playground at the Culture Night in October

If you missed Gastronomic Playground do not despair, you can meet them again at the popular Culture Night in October. 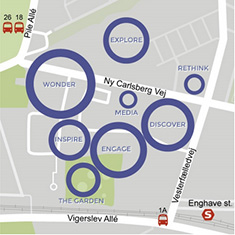 You can find  Gastronomic Playground in WONDER district in Carlsberg

An association of scientific food geeks

Gastronomic Playground is an association formed in 2008 by Food Science students at University of Copenhagen. Gastronomic Playground explore the unusual, exiting and interesting universe of the molecular gastronomy and put into effect their scientific knowledge of and passion for food. They refer to themselves as “a collection of scientific food geeks undergoing training at the University of Copenhagen to understand what happens when we cook our food - either in the kitchen or in industry”.